About Warrington Lit and Phil.

Founded in 1870, the Warrington Lit and Phil grew out of the Microscopical Society.

The Society derives from a great Northern tradition of self improvement.

During the late 18th Century an emerging industrial middle class was barred from conventional educational paths by their Non-Conformist religious beliefs so they created their own institutions. Warrington housed the world renowned Warrington Academy, basically a non Church of England university.

In 1781 the Manchester Literary & Philosophical Society was founded by Warrington Boteler Grammar School old boy, Dr. Thomas Percival, with 7 of its committee being Academy graduates.

New Lit & Phil societies were formed in Newcastle 1793 (with a Warrington influence), Liverpool 1812 (now extinct), Leeds 1819, Hull 1821, Whitby 1823 (which still runs their local library) and Leicester 1835. Academy missionaries moved further south but without success. Manchester and Newcastle remain the big players, having their own buildings and libraries.

19th Century Warrington had a flourishing adult education scene organised by familiar industrial families. The Warrington Institute for the Cultivation of Science, Literature & Arts was founded in 1811 lasting only 5 years. The Mechanics Institute came in the 1820’s; both bodies ran libraries.

In 1844 the teaching of adults began in Academy Place, whilst a year later the local authority opened the Library and Museum, the first rates supported ones in the country.

Our Society’s parent was the Microscopic Society (1863) which met in members’ homes. Wishing to expand, they called a public meeting with 48 people attending. The outcome was the formation in 1870 of The Warrington Literary & Philosophical Society, the first President being Mr. T.G. Rylands. A year later they had 71 members.

The Society was described accurately as “A free republic, where all alike have an interest in its progress; where all can differ without offence”. Initially papers were given by members: early talks included “The Treatment of Socrates by His Fellow Citizens“ and “Arguments for Not Reading Novels “. The Society’s impact was impressive, with the local paper giving 31 column inches to a meeting’s report. Until 1939, membership hovered in the 80-100 region.

Since the 1950s, membership has been around 45-60, and we still prosper and satisfy a need on wintry Monday evenings. 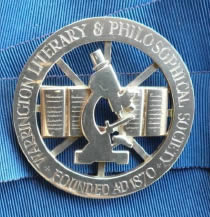 If you have any questions or need more information about our planned events please contact us.

You can also find us on social media!